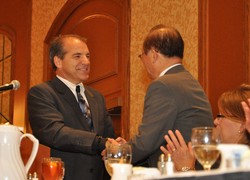 Blending a celebration of recent heritage with anticipation of the new was the theme of the Presbyterian Outlook’s luncheon at the 219th General Assembly (2010).

The six candidates for Moderator of this Assembly took time to sum up their weeks of campaigning.

The Rev Julia Leeth recalled the evangelical influence a youth pastor had in her life at a youth camp at age 19, where she first accepted Jesus Christ. Later, she was encouraged to work in church leadership and followed the road to her pastorate.

“I can never repay the Presbyterian Church enough for the faithfulness they had in me – a young, wild girl who was making all the wrong choices,” Leeth said.

Cynthia Bolbach, the lone elder in the running, discussed her perception that the most pressing issue facing this Assembly is “… how to make our denomination – especially its structure – more relevant and more able to help us do ministry effectively in the 21st century post-modern society.”

The Rev. Maggie Lauterer spoke about her assignment, which she sees as reminding congregants of Jesus’ admonition to “not be afraid.”

“God has something … to say to all of us that you need to hear,” she said.

The Rev. Jin S. Kim, lauded the faith journey of past moderator and recipient of the Ernest Trice Thompson Award, the Rev. Syngman Rhee, thanking him for “paving the way.”

Kim sees the unity of the church as a “witness to a world that is fractured in so many ways and that the scandal of division mars the body of Christ.”

The Rev. James Belle described himself as a “PPK – a Presbyterian Pastor’s Kid.” Then, without missing a beat, added “and yet, I’m still here.”

As a fourth-generation Presbyterian who grew up in the pre-unification days, Belle says he can be defined by this statement:  “Find our common faith by seeing one another not with labels – I hate labels.”

The Rev. Eric Nielsen hopes to turn the church more toward the “gifts of the Holy Spirit” rather than what he likened to the “enmities of Paul: the manifestations of the flesh.”

Jack Haber, editor of the Presbyterian Outlook, presented the Ernest Trice Thompson Award to Rhee for his nearly half-century of ministry and service to Christ and the PC(USA), especially for his ecumenical outreach efforts in the world and to Korea in particular.

Rhee, born in North Korea and expelled from high school in Pyongyang in 1948 for being a minister’s son, was welcomed at Sung Wha Methodist Seminary to train at a college level for the next two years. When Chinese troops joined the war, his mother sent him to Seoul with 200 other refugees, many of whom died.

In 1956, the Presbyterian Church provided funds for him to come to the United States where he was ordained in 1960. Six days later, he married Hae-Sun Lee.

In an emotional thank you at Saturday’s luncheon, Rhee addressed his wife, with whom he will soon celebrate 50 years of marriage.

“Thank you for your steadfast love and faithful partnership,” he said. “This honor is for you.”