Lift up examples of fulfilling commitment to “Deep and Wide” 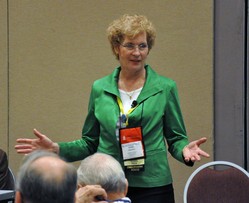 Linda Valentine addresses the crowd during the Riverside Conversation on the report from the Stated Clerk and the Executive Director of the GAMC. —By Tony Oltmann

A hopeful vision for the 219th General Assembly (2010) and encouraging stories about Presbyterian ministries were shared Saturday at one of the six Riverside Conversations.

Gradye Parsons, Stated Clerk of the General Assembly, identified seven hopes he has for this year’s meeting. His colleague Linda Valentine, executive director of the General Assembly Mission Council, expanded on Parsons’ hopes by giving examples of the PC(USA) fulfilling its commitment to “Grow Christ’s Church Deep and Wide” through evangelism, servanthood, discipleship and diversity.

- Enter decision-making prayerfully. He urged commissioners to pray individually and with each other.

- Gain a deeper awareness of the length and breadth of the PC(USA). The Assembly, he said, presents opportunities to learn how Presbyterians are at work across the nation and around the world.

- Discern with the whole church issues and challenges facing congregations. Most of the business before the Assembly originated in sessions of congregations, Parsons noted.

- Embrace a common calling to engage a changing church. “God is changing the church whether we want to change or not,” Parsons said.

- Focus attention beyond the Assembly to a world in need. GA participants from other denominations and other countries will help commissioners get a larger perspective on the needs of the world and how God is at work meeting them, he observed.

- Develop enthusiasm for sharing the faith. Many Presbyterians, Parsons said, readily live out their faith by serving others, but most are reluctant to articulate their convictions. “We need to be ready to share our stories of how God is transforming us.”

- Leave the Assembly with a sense that what they did will further Christ’s mission. Parsons encouraged commissioners not to dwell just on the controversial issues, but to share good news from the Assembly that will unite Presbyterians.

Valentine shared several stories of Presbyterian ministries of transformation. Among them was a story about First United Presbyterian Church in Guthrie, Okla. The church had few youth attending, but a number of young people regularly skateboarded in the church’s parking lot. Efforts by the church to reach out to the skateboarders brought many of them into the congregation, and several have been baptized.

Valentine acknowledged that the denomination’s decline in membership can be discouraging. “At the same time, we are seeing places where the church is alive and growing,” she said.