Report on Civil Union and Marriage among the Conversation Mix

Hard to come to agreement with such different assumptions 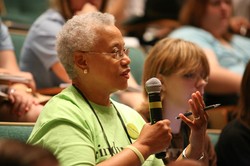 Elder Commissioner Doris Mabrey asks a thoughtful question during a the Riverside Conversation on civil unions and marriage. —Photo by Danny Bolin.

The Rev. Jim Szeyller’s voice choked as he recalled the year-long work of the special committee he moderated, which studied issues of civil unions and Christian marriage in a report to the 219th General Assembly.

“What we found early on was we had to find a new way to talk and be in relationship with each other,” he said during a Riverside Conversation Saturday. “Part of that is we cannot continue retreating to theological bunkers and lob hand grenades.”

He continued, “We have got to find some way to gather around the table of Jesus Christ that binds us together and work out these issues.”

The report, assigned to the General Assembly’s Committee on Civil Unions and Marriage Issues, calls for more resources for sessions and pastors grappling with such issues as biblical interpretation and affirms “the church’s call to extend Christ’s compassion to all.”

The minority report, signed by three committee members, urges sessions and presbyteries to study issues presented by the minority, which calls the church to “a radical inclusivity that invites all people to be transformed by the radical redeeming love of Jesus Christ.”

“Many issues are argued on interpretive assumptions,” he said. “When we get into a discussion, we wonder why we can’t come to agreement when we start from such different assumptions. It is time to have those conversations in accordance with our constitution.”

Speaking for the minority, the Rev. Bill Teng, said that like the majority, “We believe the church needs to confront those differences, and we’ve laid them out in a way we hope is fair for all. We minister senstively and mercifully to all, heterosexual and homosexual alike, trying to guide them in paths of confession, forgiveness and restitution.”

According to Teng, “radical inclusivity” for the minority means “understanding that the gospel is good news for all people. But there’s an exclusive part to that: Once we follow the gospel, aren’t we excluding other options? When you marry, you exclude all others, and when you say yes to Jesus, you are saying no to the rest of the world.”

The minority report, said Rev. Tracie Mayes Stewart, who also signed it, “affirms God’s gift of sex is only to be expressed within the bounds of marriage between a man and a woman. We believe that’s especially important for young people facing a culture of sexual hedonism.”

If “neither party in this conflict in good conscience can relent, what are we to do?” asked committee member the Rev. Clay Allard. His answer: “Draw near to the one who saves us, and remember the gifts that Christ places in our heart. We are a people who have always fought. Our call to the church is to find a more excellent way to begin the process of being able to disagree without binding the conscience of another and without throwing the other under the bus.”