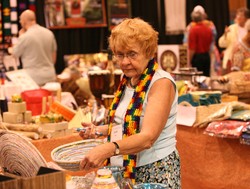 The Global Marketplace offers shoppers keepsakes that help the economies of the people who created them. —Photo by Danny Bolin

Visitors to the 219th General Assembly’s Global Marketplace can buy olive oil from Israel/Palestine and a blend of spices grown there so they can whip up their own salad dressing. Nearby they can buy a bowl to hold their salad, and beyond that a new purse to hold the money to pay for all their purchases.

Not only will folks come home with a keepsake from the Assembly, but they’re directly supporting the people who produced that memory.

Emily Hewes, who runs Esperanza en Accion (Hope through Action) in Managua, Nicaragua, helps more than 225 artisans to better price and market their goods. A top seller is a small coin purse that Nicaraguan women make from the shiny, colorful foil from used potato chip bags.

“Our purpose is to help Nicaraguan artisans support themselves,” she said. All one artist needed was a loan for $65 so she could buy two kilns. Now that she’s becoming more well-known, she’s been able to rebuild part of her flooded house and has successfully started a no-interest loan program for her fellow artisans.

Dean Current works with Eco Palms, which pays Guatemalan and Mexican farmers a fair price for the palms that churches use for Palm Sunday services. The agency returns five cents for each frond sold for community development projects in a way decided by local farmers.

Barbara Lorraine, who splits time between Texas and Guatemala, works with 80 craftswomen who inhabit a dangerous part of Guatemala City, the capital.

“Most of them know how to sew, but they need to know what gringas will buy,” she said. Fortunately, Lorraine’s importer also has a fashion sense, and she gives the Guatemalans periodic pointers on what’s selling in the United States.

Lorraine’s group, United for a Better Life, also has a school, clinic, library, and a half-day tutoring program.

“It’s like I have 80 daughters,” she said of her band of sewers. “I have the best Mother’s Day in the world!”

On the other side of the world, Palestinian farmers sell their olive oil with a group called “Import Peace.” Robert Massoud offers shoppers hunks of bread and a dish containing the rich, tasty oil, which he sells for $19 per bottle.

That may be more than you’ll pay your grocer, but Massoud pays the farmer five dollars per bottle for his or her work. That’s many times more most farmers receive.

“The olive is a universal symbol of peace,” he said. “Our hope is that olive oil will open people’s hearts so they’ll work to influence the government to act more even-handedly to bring about peace.”