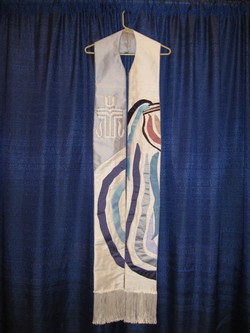 Stepping into the room where members of Lydia Women’s Empowerment Project meet is to enter a world most people rarely experience.

As Lydia Project member Miss Sallie said, “There really are people who care.”

“Finding a group of people who really care about what happens to each person is the beginning of empowerment for the Lydia Project women,” said the Rev. Paula Sanders, leader of the group and executive coordinator for the Committee on Local Arrangements for the 219th General Assembly (2010).

Sanders said many Lydia Project members have experienced little genuine caring in their lives, and their trust levels reflect this lack of compassion.

The magical room where the Lydia Project women meet is a sight for sore eyes. There are the two tables pushed together, surrounded Saturday mornings with a lively and stimulating Bible study, usually focusing on women in the Bible.

Behind the study tables are the two high-backed chairs. A wise member of the group may sit in one of the cozy chairs until another woman settles into the other. The chairs often become the sacred space where one woman tells part of her story while the other woman listens. Storytelling empowers women.

The room is full of sewing machines threaded with a rainbow of colors. There is a mounted pegboard where an army of scissors is neatly lined up. Bulletin boards around the room proclaim the wisdom of many religious traditions and the “threads of the Lydia project,” Sanders said.

And in the back of the room, there is breakfast cereal, a full lunch and other treats to make sure no one in the room is hungry. The women’s children are lovingly cared for by a Lydia grandmother.

The Lydia Project, an outgrowth of Kwanzaa Community Church in north Minneapolis, began in 2005. The women’s ministry was modeled after recovery groups at Glide Memorial Church of San Francisco.  The Lydia Project’s primary goal at the outset was to facilitate “the recovery of the humanity of women suffering the impact of racism, classism and sexism,” Sanders said.

The first thread, Spiritual Empowerment, is addressed in Saturday morning Bible study – deep, lively and enlightening. Added to the Bible study is the annual summer retreat to the north woods, labyrinth walks and the many cultural events that offer the women a lens by which to see the spirituality of creativity.

The next thread is Family Empowerment; the Lydia women walk with one another and freely talk about their trials and joys.  Sanders said that when the women support one another, it “breaks the isolation which often is a part of intergenerational poverty.”

Thread three is Social Change. “We can walk and walk with women in their life situations, and all we get is sore feet,” Sanders said. The Lydia women are taught how to access the systems of power in their neighborhoods and in the city.

This spring, 22 Lydia women traveled to the state’s Capitol in St. Paul to attend the Joint Religious Legislative Coalition’s “Day on the Hill.” The women were able to talk with their legislators, speaking truth to power about dangerous living conditions in certain sections of the Twin Cities. One Lydia woman told her representative, “I don’t even want to go outside my house.”

Some of the women who headed to the Capitol originally thought they were not allowed to enter. By the end of the day, many of them were strongly urging their legislators to take steps to eliminate health care disparities and stop violence.

Tamika, one of the Lydia women, said her sister’s fiancée was murdered for his money. Her sister needed food, she said. The Day on the Hill saddened her, to see how state budget cuts have affected poor people – but she is committed to staying in the fight.

The fourth thread of the Lydia Project is Economic Empowerment. Sanders, a master seamstress, is teaching the women to sew. While some already knew the basics, others were completely unfamiliar with hand and machine sewing.

Eventually volunteers joined Sanders to help teach the women to sew with confidence. When the liturgical textiles they make are sold, the women share in the profits from the sale.

Lydia women will take shifts showing and selling the fruits of their labor – 22 stoles and a large commissioned banner – in the General Assembly exhibit hall.

One of their stoles was presented to elder Cynthia Bolbach on Saturday evening during her installation as the newly elected Moderator of the 219th General Assembly.

While the beauty of their finished products is visible, the women know the wonder of the room where the Lydia Project really happens.