Women of Faith award given to four recipients

Recognized for passion, dedication and faithfulness 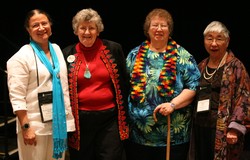 Four women were honored Sunday morning for their passion, dedication and faithfulness at the Presbyterian Church (U.S.A.) Women of Faith Awards breakfast at the 219th General Assembly (2010).

Elder Joyce Uyeda, the Rev. Elizabeth Knott, elder Elona Street-Stewart and the Rev. Margaret Howland were recognized for their years of ministry in areas ranging from youth ministry to working for justice for Palestinians.

Uyeda is active with Presbyterian Women of Parkview Presbyterian Church in Sacramento, Calif., and moderator of the Ethic Concerns Consultation. That group began a summer youth program at Zephyr Point Presbyterian Conference Center, and Uyeda said her time there was some of the best of her life.

Knott accepted her award in honor of Palestinian women who display hope daily in the face of the Occupation. In 1993, she founded Pal Craftaid, an organization that helps Palestinians find markets for their olive wood and needlework crafts.

“I am the happiest and the saddest when I am in Palestine,” Knott said – happy to be with friends but sad to see their lack of freedom.

Street-Stewart’s focus has long been on multicultural and cross-cultural issues. An advocate for racial justice, peace and equal opportunity, she has served in all levels of the church.

Street-Stewart was the first Native American to serve on an urban school district board in Minnesota, a position she still holds. She also chairs the American Indian Family Center.

Street-Stewart spoke of her deep respect for previous honorees and those who have stood with her.

“We are strengthening the circle each day together,” she said.

Howland was the 12th woman to be ordained as a minister of the Word and Sacrament in what is now the PC(USA). Pastor emeritus at South Presbyterian Church in Yonkers, N.Y., she has long been an advocate for those on the margins.

She was the only woman minister commissioner to the 1968 General Assembly in Minneapolis. There, she discovered Presbyterian Peace Fellowship (PPF), with which she has since remained involved. Howland accepted her award on behalf of PPF and countless other influential organizations, teachers and mentors.