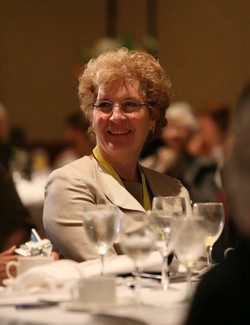 By unanimous vote, the Mission Coordination Committee of the 219th General Assembly (2010) recommended that Linda Bryant Valentine be confirmed to a second four-year term as executive director of the General Assembly Mission Council (GAMC).

The Assembly will vote on the recommendation later in the week.

In other business, Valentine walked the committee through the latest figures on mission giving.

However, not all was gloom and doom.

“While funding to denominational mission has declined over the last decades, Presbyterians are giving more to mission than ever before,” she said.

“We as a church are rediscovering the importance and value of and recommitting to expanding partnership in God’s mission. As we do, we are able to expand our witness to Christ in this country and around the world in ever more profound and impactful ways.”