Though membership numbers are declining, Christianity is growing 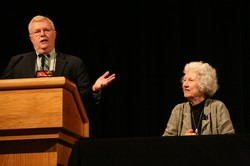 “Let us hear about this crazy thing God is doing with the church.” That was the invitation of the Rev. Gradye Parsons, Stated Clerk of the General Assembly, to the capacity crowd at the 219th General Assembly (2010) breakfast Monday. His invitation was illuminated later by the breakfast’s speaker, Phyllis Tickle, author of The Great Emergence; How Christianity is Changing and Why.

Tickle, a former Presbyterian “seduced by the smells and bells of Anglicanism” at 17, spoke with appreciation of coming home to her natal community. “I will always have the warmest spot in my heart for those first 17 years, and a real gratitude about what I was taught … about the Bible,” she said.

“This is a Judeo-Christian phenomenon,” Tickle said. “If we were more ecumenical, we would also include Islam, which seems to go through the same 500-year cycle.”

Tickle applies the “rummage sale” theory to all of society. “Across the board, everything changes. Economically, intellectually, politically, everything shifts.”

The “Great Emergence,” according to Tickle, is commonly dated as being “plainly in place by 9/11, with lead-ups since 1842, in which you can see a peri-emergence.” She said that scholars would say of the emergence that “it has brought us a non-hierarchical arrangement, deinstitutionalization, the rise of information and technology, and, by the way, emergence Christianity.”

“It is the business of religion to inform the society in which it exists and also to be informed by that society,” she said. “And so emergence Christianity is to the Great Emergence as Protestantism was to the Great Reformation.”

Rather than a source of anxiety, Tickle said that there is every reason for Christians to instead be reassured that the rummage sale will allow the church to reclaim much that may have been misplaced or lost. “We’re getting rid of all that stuff, but we’re also finding the ancient treasures of our faith,” she said.

One of the primary characteristics of emergence Christianity is that it is more interested in narrative than in doctrine. Tickle recounted a favorite story in which she was addressing a group in Atlanta about the virgin birth. After her talk, a young man, who had abandoned his role scraping dishes to listen intently, came up to her and said, “I don’t understand what their problem is. [The virgin birth] is so absolutely beautiful, it has to be true whether it happened or not.”

Of her own Episcopal denomination, Tickle observed that while three parishes are closing every month, emerging churches are opening at almost the same rate. “Are our figures going to go down?” she asked. “Yes. Is the Kingdom of God going to expand? You better believe it. That’s exactly what’s happening.” She named Germany as one place where the church is burgeoning but membership is down.

To demonstrate how established and emergence churches are called to relate to each other, Tickle cited the work of the late Ray Anderson, a former professor at Fuller Theological Seminary and author of An Emergent Theology for Emerging Churches. Anderson maintained that in the beginning of the Christian faith, there was an “inherited” church in Jerusalem and a “fresh expressions” church in Antioch, a clear parallel to today’s established and emergence churches.

In an afternoon press conference, Tickle explained the inherent possibilities for misunderstanding the term “emergence,” which was appropriated for this movement from sociology and biology, in which the systems of beehive and anthill were contrasted and compared. The difference between a queen bee and a queen ant is that the latter basically does nothing. Therefore the term “emergence,” as applied to the church, refers to a non-hierarchical, flat organization.

Tickle closed her remarks by commending the Episcopal Church and the Presbyterian Church (U.S.A.) for being receptive to the emergence church. “We have both shown great openness to a fresh understanding of church,” she said.

Following a brief question and answer session, in which Tickle explored the roots of emergence Christianity and several of its characteristics, such as the fact that membership doesn’t matter, Parsons closed the morning’s event with worship, assisted by the Rev. Landon Whitsitt, 219th General Assembly Vice-Moderator.

Parsons’ sermon continued the themes articulated by Tickle. Preaching on Jesus’ calming of the storm in Luke 8:22-25, Parsons said that storms are scariest in the middle. “Often in the middle is when that question, ‘Where is your faith?’ is most relevant – in the middle of General Assembly or the Great Emergence,” Parsons said. “It’s in the middle when we are not where we used to be and don’t know where we’re going that it’s really very scary.”

Parsons said that over time he had developed a mantra in response to the Lucan text, which he had the gathering say together, “Get in the boat, go across the lake, there will be a storm, you will not die.”