The key is dialogue 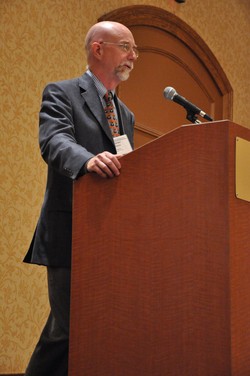 Gustav Niebuhf, Associate Professor of Religion and the Media at Syracuse University, spoke about tolerance at the Covenant Network Commissioner Luncheon. —Photo by Tony Oltmann

“Yes, he is one of the Niebuhr Niebuhrs,” said Deborah Block, co-moderator of the Covenant Network, as she introduced Gustav Niebuhr, featured speaker at the CovNet Luncheon Monday as part of the 219th General Assembly (2010).

Professor of Religion and the Media at Syracuse University and a renowned religion journalist, Niebuhr was chosen to address the group for his contribution to boundary-breaking dialogue.

Niebuhr began his talk, “Tolerance is a Floor, Not a Ceiling,” by recalling the time he was covering two advocacy groups on opposite sides of a divisive issue at a previous General Assembly. “What was remarkable was not that they disagreed with each other, but that both displayed a noteworthy calm – neither spoke unpleasantly about the other. Each group accorded to the other respect.”

Going forward as a denomination will require developing a framework for unity that depends upon this approach, Niebuhr said. “Respect is the third option in interaction with people with whom one differs. It takes courage to give to the other a moral standing, even when passionately holding to a different perspective.”

The first two options are intolerance and tolerance. Intolerance, characterized by cable news networks, pushes society ever further into antisocial behavior. But tolerance is no better, useful only when the alternative is violent mayhem.

Respectful engagement takes far more effort. It’s about being authentic and expecting authenticity in return. The key word is dialogue – both speaking and listening. It means not forcing people to confront the worst stereotypes about themselves.

The challenging call to listen and understand leads to spirituality. “Who do we believe is qualified to bless us spiritually? How wide do we cast that circle and how do we define its boundaries?” Niebuhr asked.

Suggesting that we look at how we value the contribution of writers and poets (e.g., W.H. Auden, Emily Dickinson, Thomas Merton and Robert Louis Stevenson) to help point a way forward, he said: “I cannot imagine focusing on their sexualities; we listen to their work as teachers. We speak to them in our inner thoughts as they guide us into reflection.”