Skype gets pastor to two places at once on Sunday morning

Message is beamed from downtown Minneapolis to Payson, Ariz. 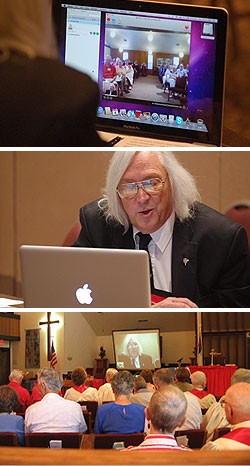 While seated in the Minneapolis Convention Center, the Rev. Chuck Proudfoot preaches via his laptop and Internet connection to his congregation in Payson, Ariz. Sunday morning. —Photo by Shane Whisler and Scot Proudfoot

The Rev. Chuck Proudfoot worked in Minneapolis on Sunday. He also preached at the worship service of his congregation, Community Presbyterian Church, 1,600 miles away in Payson, Ariz.

Proudfoot preached live via Skype, a free one-to-one online video conference tool, which kept him from missing two Sundays in a row due to volunteering at the 219th General Assembly (2010).

Back in Arizona, about 90 worshipers watched the projection screen as Proudfoot read the Gospel lesson. He, in turn, viewed his congregation from Minneapolis via his MacBook.

With the laptop as his pulpit, Proudfoot turned the pages of his sermon as he preached and used a dollar bill as an illustration.

The dollar bill, any bill, “preferably a $100 bill,” he said, would show the handiwork of the Rev. John Witherspoon, who signed the Declaration of Independence and designed the seal of the federal treasury. He watched and waited after he instructed the worshipers to dig out their bills.

“And just leave those out for the offering,” he said to the congregation’s chuckles.

The congregation didn’t know that Proudfoot’s son Scot had called his father earlier to share prayer concerns that elders had collected at the beginning of the service. That call allowed Proudfoot to lead a personalized pastoral prayer, even from the Minneapolis Convention Center.

Proudfoot’s only similar technological experience was broadcasting last year’s Easter sermon via Skype to his homebound mother’s computer in Colorado.

But what if the technology fails?

“We videotaped the sermon last week,” he said. “It starts with the message, ‘If you’re seeing this, the Skype thing didn’t work.’”

Proudfoot has volunteered for more than 20 years in the Assembly’s communication center.