Also votes to continue commitment to support withdrawals of troops, contractors from Iraq 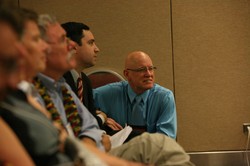 The 219th General Assembly Middle East Peacemaking Issues Committee voted to send to the full Assembly a report from the Mission Responsibility Through Investment (MRTI) committee, which recommends the denouncement of actions by Peoria, Ill.-based Caterpillar Inc.

“On the basis of Christian principles and as a matter of social witness, the 219th General Assembly (2010) strongly denounces Caterpillar’s continued profit-making from non-peaceful uses of a number of its products,” MRTI said in its report to the committee on its engagement with corporations involved in Israel, Gaza, East Jerusalem and the West Bank.

“We call upon Caterpillar to carefully review its involvement in obstacles to a just and lasting peace in Israel-Palestine, and to take affirmative steps to end its complicity in the violation of human rights,” the report continues.

MRTI pointed out that Caterpillar has been slow to engage it and the broader ecumenical community about their concerns. “For extended periods, the company was unwilling to meet,” MRTI said.

“When they have met, they have denied any responsibility for how their products are used or for their knowledge of the clear purposes for which these products are acquired from Caterpillar’s dealers,” the report reads. “Caterpillar’s representatives have been dismissive of the ecumenical community’s concerns, and their responses (or lack thereof) have stood in sharp contrast with those of other companies doing business in Israel/Palestine.”

The Rev. Brian Ellison, MRTI chair, told the committee that MRTI took this stance rather than divestment because it felt it had not “exhausted every possible action.”

Earlier in the day, the committee heard from a number of people during open hearings. Some 160 people signed up to speak on the items before the committee.>

Many addressed the 172-page report of the General Assembly Middle East Study Committee (MESC). The report, “Breaking Down the Walls,” has 39 recommendations.

The Rev. Craig Hunter, pastor of Trinity Presbyterian Church in Denton, Texas, spoke in favor of the report, saying he has lived in the region and “seen with my own eyes” the devastation from the conflict.

Gustav Niebuhr, member of First Presbyterian Church of Skaneateles, N.Y., spoke against the item. The short narrative on this report “is anti-Israeli,” he said. “I would recommend rejecting this, it is terribly unbalanced.”