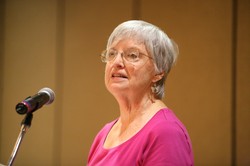 In her years working for the General Assembly's network support for rural and small church ministries, Diana Stephen heard many success stories of small churches overcoming challenges to thrive in their communities.

On Monday, she shared some of those stories during a sold-out luncheon for small churches.

One such church, First Presbyterian in Sisseton, S.D. (population 3,000), has tripled its attendance over the past four years under the leadership of Peter Reynen, who divides his time between rural medicine and rural ministry.

Four days each week, Reynen operates a family medicine practice in Milbank, S.D. On Friday and all through the weekend, he works 20 hours in a tentmaking ministry at the church.

The shared model works, Stephen said, “because the church, his medical practice and the hospital all respect his schedule, and the congregation feels no inadequacy because they have a part-time pastor.”

Instead, church members have taken on greater responsibility in leading the church, and congregants are willing to try new worship experiences, including expanding music to include traditional hymns, praise music, and even a bit of bluegrass.

The neighborhood around Fourth Presbyterian Church in South Boston has transitioned from Irish and Polish to more Asian, African and Hispanic residents. The church has responded by combining with other churches to serve 300 families at a community food bank and purchase an adjacent property it has transformed into affordable housing.

Seminary students from around Boston come to Fourth Church every year to work as interns. “The interns support the church, and the church supports the students’ education,” Stephen said. “I hope these stories aren’t unique to most of you,” Stephen said.

Small churches that succeed despite the challenges of finances and few members do so in part, she said, because “they risk letting go of the ways that we’ve always done it.”