Also: Strong support for getting to better know ‘Christian Churches Together’ 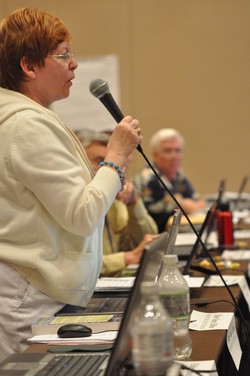 Elder Nancy Clifton, Presbytery of Pittsburgh, joins the discussion while on the Ecumenical and Interfaith Relations Committee. —Photo by Tony Oltmann

In more than two hours of debate, commissioners on the 219th General Assembly Ecumenical and Interfaith Relations Committee decided not to recommend that the Assembly accept the paper “Christians and Jews: People of God.”

Regarding the paper on Christians and Jews, several observers and commissioners, from open hearings to the committee debate, said words to the effect of, “I do not feel this paper is ready.” Many expressing that feeling said the paper was not complete because the voices of Middle Eastern Christians were not included.

Sydney Levy of Jewish Voice for Peace agreed with that concern, saying as a descendant of Holocaust survivors, it is essential that every voice be heard. With a different perspective, a Jewish scholar heartily endorsed the paper.

“[The paper] is faithful to the work that has been done for decades,” said Adam Gregerman. “The Presbyterian church has much to be proud of ... for dialogue with the Jewish community.”

Commissioner debate raised three areas of concern that could not be fixed with amendments, deletions, substitutions or an addendum.

“What seems to have stuck in the minds of commissioners is that the document is not complete because voices are absent,” said Raafat Zaki, a resource person for the committee who is also secretary for the National Middle Eastern Presbyterian Caucus.

Zaki and several others said that Middle Eastern Christians from Palestinian territories to the United States were not asked to share input until the paper was written. Others said they were satisfied that enough voices were heard.

The committee also voted 51-1-2 to recommend that the PC(USA) begin a four-year engagement with the relatively new alliance, Christian Churches Together (CCT). CCT has deep roots, but officially launched in 2006 when several expressions of Christianity adopted its bylaws. Earlier in the day, the committee voted to recommend that the PC(USA) and the Seventh-Day Adventist church get to know one another better.