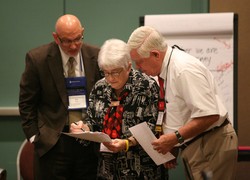 The Rev. Rick Nutt, moderator of the Assembly Committee on Civil Union and Marriage Issues, confers with committee assistant, the Rev. Carol McDonald, and resource coordinator, and the Rev. Vernon Broyles. The committee voted Tuesday to recommend changing the definition of marriage in the Directory —Photo by Danny Bolin

The Health Issues Committee of the 219th General Assembly (2010) opened Tuesday morning passing a motion to reconsider the previously approved “Taking a Stand Against Forced and Coerced Abortions.”

The committee then deleted “abortions” from the title and inserted “decisions on ending or continuing a pregnancy.”

Although the vote to reconsider the overture narrowly passed with a 24-22-4 vote, the final version was overwhelmingly approved with a 45-3-3 vote.

With an exception to review costs of briefings with outside partnerships, the committee passed by a vote of 47-1-1 the overture, “On Full Access to HIV/AIDS Prevention and Treatment Services in U.S. Correctional Facilities.” The item calls for implementation of a comprehensive HIV/AIDS prevention and treatment program in correctional facilities, where the incidence rate of HIV infection is 2.5 times greater than the general population.

A subcommittee reported on a referral from the 218th General Assembly (2008), “Congregational Resource Materials on the Subject of Reproductive Options.” That group supported the referral direction that the materials did “more adequately reflect the full spectrum of biblical, theological, and pastoral council, while remaining consistent with the policy of the 1992 Report of the Special Committee on Problem Pregnancies and Abortion and the 2006 policy on late-term pregnancies and abortion” as specified by the 218th General Assembly (2008).

Commissioners with both pro-life and pro-choice beliefs supported the materials and thought they reflected adequately the church’s policies. The item passed with a vote of 37-8-1.