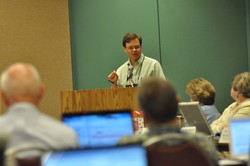 Moderator of the 216th General Assembly Rick Ufford-Chase spoke in the Peacemaking and International Issues Committee. —Photo by Tony Oltmann.

The 219th General Assembly Peacemaking and International Issues Committee voted 49-2 on Monday to recommend that the Assembly call on the U.S. government to end combat operations in Afghanistan.

The PC(USA) has made no statement calling for peace in Afghanistan since the war began in 2001.

The action asks that all combat operations cease “except those to protect Coalition troops remaining, Afghani security force troops and humanitarian efforts.” It also recommends expanded humanitarian aid and the creation of a consensus building process that includes all stakeholders.

“Whether we like it or not, people around the world associate what is going on in both Iraq and Afghanistan as a war of Christians against Muslims,” said Rick Ufford-Chase, a former GA Moderator. Therefore, he stressed that it is important for the church to express its opposition.

The proposal was submitted as an overture by the Greater Atlanta Presbytery. Similar overtures were submitted by three other presbyteries Hudson River, Scioto Valley and San Francisco. The committee declared that those overtures were answered by the statement it approved.

The committee also recommended that the Assembly pass actions related to peacemaking in Sudan and on the Korean peninsula.