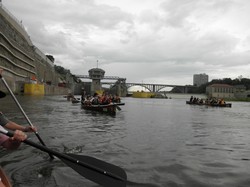 On Monday, many General Assembly participants — those not hog-tied to committees or other obligations — enjoyed a river of living water, literally, thanks to the Committee on Local Arrangements.

Wilderness Inquiry led the excursion with the help of two National Park Service rangers as interpretive guides. Paddling down the Mississippi in handmade, 12-person canoes — like Minnehaha herself — we adventurous Presbyterians survived violent waves (from a speed boat and a barge) and encountered wildlife — juvenile eagles glaring at us from their tree perches, cliff swallows darting in and out of their sandstone-cliff homes, blue herons displaying that prehistoric looking form and walleye leaping from the water to greet us with splashes. Well, maybe they were carp.

One of our guides was an ornithologist of some repute who shared interesting facts about the birds in the area. Of equal importance, though certainly less glamorous, the guides talked about storm sewers emptying directly into the river with no filtration and polluting the river.

We talked about steps we can take in our own homes to help with this problem, such as preventing water from roof downspouts from going into storm sewers.

We paddled between the pale walls of the only “gorge” on the Mississippi — the same cliffs that provide the swallows their habitat and create unique dwellings for many plants. And we learned that St. Anthony Falls, just above Nicollet Island, is the only waterfall on the Mississippi.

As our six canoes floated along, always staying close together, we learned about the dams and locks along the river. Did you know that two-thirds of the locks on the Mississippi occur from Minneapolis northward? From here to the Gulf the gradient is flat enough that few other locks are needed.

We experienced what it is like to go through one of the locks. We entered on the high side, where the gates locked behind us and the water started to lower. In a concerned voice, someone stated, “I have a sinking feeling.”

Thirty-eight feet later, the gates opened at the opposite end and we proceeded onward into more flowing water — rain water, that is.

This little group of believers, cold and waterlogged after the surprising, untimely and somewhat uncomfortable change in weather, emerged happy after a day on the mighty Mississippi. The experience seemed somehow parallel to the sentiment expressed by Phyllis Tickle at the GA breakfast earlier in the day: We certainly wouldn’t have asked for the rain, we didn’t want it, it seemed unfortunate and there were some who could have let it ruin the day. However, in the end there were smiles on our faces as we returned to our home away from home here with our Presbyterian family.