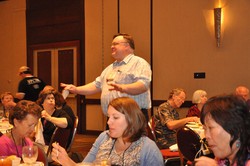 Christy Ramsey, an observer from Akron, Ohio, joined in on the conversation about "The Changing Landscape of Youth and Media!" at the GA Media Luncheon on Monday. —Photo by Tony Oltmann.

“Just because you start a Facebook page doesn’t mean young people will come to your church,” outgoing General Assembly Moderator the Rev. Bruce Reyes-Chow told Presbyterians attending the GA Media Luncheon on Monday. The lunch was cosponsored by Presbyterian Media Mission and the Church Restoration Group.

Speaking on “The Changing Landscape of Youth and Media,” Reyes-Chow shared lessons he has learned as a parent, pastor and pioneer in the field of doing ministry through social media. The 41-year-old pastor of Mission Bay Community Church in San Francisco co-hosts a weekly podcast and uses Facebook, blogging and Twitter to interact with members of his congregation.

The church has a responsibility for nurturing and guiding young adults, the so-called millennial generation, in safe and healthy ways of using social media, said Reyes-Chow. He said he likes to think of social media as “an approach to living that provides a space to discern God’s intentions for the world.”

Older and younger generations use social media differently, he said. While older people tend to use media to accomplish something, millennials see it simply as a natural way to interact with others.

Reyes-Chow said he urges church people to expand their definition of “community,” in light of how community is experienced by the younger generation. He said he has experienced real community both face-to-face and online.

Families and church youth groups need to set guidelines for social media that go beyond just “forbidding” its use, said Reyes-Chow. He noted proudly that this General Assembly has a social media policy, which may be a first for denominations.

At the beginning of his talk, Reyes-Chow announced that he has just been hired by McCormick Theological Seminary in Chicago as an instructor in social media and ministry.

Dennis Molnar, chair of the leadership team for Presbyterian Media Mission (PMM), announced that PMM leaders are already planning special events for the 220th General Assembly (2012), which will be in Pittsburgh, where PMM is based. He said Family Communications, the parent company of the TV show “Mister Rogers Neighborhood,” would have a presence at the Assembly.

The other sponsor of the Media Lunch, Church Restoration Group, is in the Pittsburgh area and specializes in the reconstruction of older church buildings to incorporate new technology.