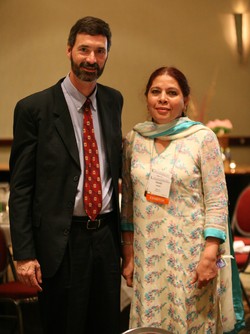 The Rev. Hunter Farrell and Veeda Javaid at the World Mission luncheon. —Photo by Danny Bolin

The Presbyterian Church (U.S.A.) is writing the third chapter of a mission “love story” that began in 1837, a denominational mission leader said Sunday at the World Mission Luncheon.

Hunter Farrell, director of Presbyterian World Mission, said the newest chapter in the saga is the formation of “communities of mission practice.” Participants in these communities include World Mission staff and mission personnel, global partners, and grassroots Presbyterians directly involved in international mission

The purpose of the communities is “to discern the mind of Christ as we participate in God’s mission,” Farrell explained.

The earliest PC(USA) mission efforts were focused exclusively on sending mission personnel, he said. Beginning in the middle of the 20th century, Presbyterians in the United States moved into the second chapter of its history, emphasizing working in partnership with churches overseas that were formed through the efforts of early missionaries. “Partnership was limited to the leaders of our church and the leaders of partner churches,” Farrell said. Today, however, numerous congregations and presbyteries have established partnerships with international counterparts.

This has led to World Mission’s focus on facilitating communities of mission practice, which will help coordinate efforts, Farrell said.

One of those connectors, Tracey King-Ortega, the PC(USA)’s regional liaison in Central America, invited  congregations and presbyteries directly involved in international ministries to work with mission personnel. “They can help you maximize efforts with these three communities working together,” she said. Transformation, she added, is the goal for everybody involved.

Speakers from Westminster Presbyterian Church in Minneapolis stressed the importance of building relationships with partner congregations. Westminster member Trish Van Pilsum, who has visited the congregation’s partner in Cuba, said, “I was inspired by the people of Matanzas and my faith deepened.”

While the visitors from Westminster brought medicine, glasses and other resources, the Cubans would not say those were the most important items the congregation brought, she said. “The people of Matanzas would say that we brought energy, we brought compassion and we brought love.”

The luncheon also included remarks from the Rev. Noe Bernier, an archdeacon of the Episcopal Diocese of Haiti. He said the PC(USA) has worked with the diocese since the 1960s in its ministries of health, education and economic development.  The church continues its holistic mission amid the daunting challenges presented by January’s massive earthquake.