At GA 219 this week, teens contributed on many levels 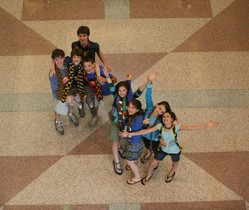 COLA volunteers with their orange name tags can be spotted all over the Minneapolis Convention Center. —Photo by Danny Bolin

The youth group from Atlanta’s Central Presbyterian Church has found a second home at the 219th General Assembly (2010) here.

At that Assembly in San Jose, Calif., the youth and their director of youth ministry Molly Kent found out just before they arrived in San Jose that they could volunteer only for advocacy groups but not work at events open to the entire body because of insurance reasons.

Working with the Committee on Local Arrangements, the eight young people have greeted commissioners at the airport and taken them to waiting buses, put chairs away following the Fourth of July picnic and provided relief shifts for workers in the exhibit hall. Some testified at committee hearings. Others worked for advocacy groups, including That All May Freely Serve and Covenant Network.

On occasion, they staged “flash mob” scenes at the Minneapolis Convention Center, freezing in place for five minutes while activity went on all around them.

“I never recognized how important youth opinions are,” said Miriam Moore-Keish, 13. “When we testified, people told us we did a good job.”

“I think the church is feeling more welcoming for everyone,” said Clay Heidbreder, 17.

Added Kessler Catterall, 14: “My younger brother and sister are at an age where they don’t like getting up for church in the morning. There’s something about this trip that makes me want to enlighten them and help them see what’s important.”

The youth say they’ll return home this weekend confident they’ve made a difference and eager to attend the next Assembly in Pittsburgh.