Breakfast bytes: PCs and the PC(USA)

The Bible reads just as good on a laptop, author reminds audience 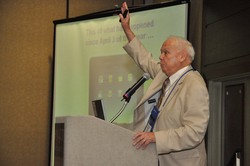 Donald Griggs made a self-deprecating confession as prelude to his presentation, “Biblical Literacy in a Digital Age,” during the Presbyterian Publishing Corporation breakfast at the 219th General Assembly (2010).

The noted author of the Bible from Scratch series had a “Homer Simpson” moment minutes earlier: He’d left his comments at home.

Then a member of the Publishing team noticed what Griggs was holding.

“Do you have them on your iPad?” Sheepishly, Griggs said yes.

Griggs fully endorses the rapidly growing digital world, one that still lacks the full participation of every PC(USA) congregation. Not only can cyberspace be a means to “advertise” a congregation, it can also be a tool for evangelizing.

While encouraging everyone to read and study the Bible, Griggs offered several ways to gain biblical literacy, and he pointed out that a Bible need not be ink printed on paper.

With its annotated chapters and verses, the Bible is already set up for the digital world. There are already “Good Book” apps for your Smart Phone, and digital Bibles are available at your fingertips on your laptop, netbook or flash drive.