Navigating the sea of change

Speaker discusses how loss, grief can stymie transition in congregations 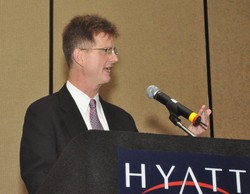 The Rev. Ken McFayden, dean of the Center for Ministry and Ladership Development at Union Presbyterian Seminary, speaks Tuesday at the Interim Ministry lunheon. —Photo by Tony Oltmann

Maybe infants can model healthy change for the PC(USA).

That’s one thought considered Tuesday by the nearly 50 folks attending the Interim Ministry luncheon during the 219th General Assembly (2010). The speaker shared a quote, allegedly said by Mark Twain: “The only person who likes change is a wet baby.”

Laughter trailed off as Ken McFayden of Union Presbyterian Seminary paused before returning to his primary metaphor of our church navigating “the sea of change ... against a backdrop of loss.” He said babies are willing to endure the short-term exposure to vulnerability, because they know change is good.

McFayden, who is dean of the Center for Ministry and Leadership Development at the seminary, delved deeply into illustrations from his book, Strategic Leadership for a Change: Facing Our Losses, Finding Our Future. He named the “undertows” that can stop the change of transition for congregations and even interim pastors who are often the most adept at leadership during transitions.

“(You) can identify congregational strengths and vulnerabilities,” he said. “You can define capacities for growth and for destruction.”

Here is a summary of the undertows to navigate:


“Many congregations I’ve seen are yearning for leaders who, in whatever way shape or form, can help them avoid the pain of change.”

Quoting from the book, Leadership on the Line by Ronald A. Heifetz and Marty Linsky, he said, “People do not resist change per se, people resist loss.”


“One of my greatest fears is that we have visions that don’t inspire people,” he said. “Visions have to inspire (people) so they will work for change and endure the pain that comes with it.”