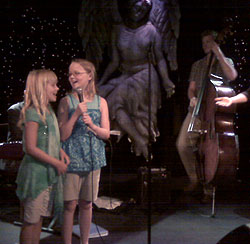 Nichola Miller, lead singer of the jazz trio playing at Hell’s Kitchen restaurant Tuesday night, has a new song in her repertoire, thanks to sisters Hannah and Julia Glasgow of Junction City, Kan.

Mustering their courage — and helped forward by the Rev. Nancy Kahaian, interim executive of the Synod of Mid-America — the girls asked Miller if she knew “Jesus Loves Me.” Miller didn’t, and neither did her bass player or keyboardist. The girls sang her a line, and the singer hummed it for her keyboardist, who jazzed it up and played the sisters in.

The sisters belted out the Sunday school standard, the crowd joined in and the girls were rewarded with loud applause for their efforts.

Curiously, Miller’s next selection was “The Devil Don't Care.”

The impromptu performance has brought 11-year-old Hannah and 9-year-old Julia some GA notoriety.

“People have been coming up to us asking, ‘Are you the girls who sang at Hell’s Kitchen?’” Hannah said. “I have a fear of singing in public, but it came out all right.”

“We’ve heard a lot at General Assembly about kids being the future,” said their father, the Rev. Matthew Glasgow, a minister commissioner and pastor of First Presbyterian Church in Junction City. “This is the perfect example of kids being able to lead.”

The girls cut their GA teeth as observers at San Jose in 2008, and they have another Assembly tie: their great-grandmother, Martha Martin, served as vice moderator of the 188th General Assembly of the United Presbyterian Church in the United States of America in 1976.