‘The whole is greater than the sum of its parts,’ says Brashear 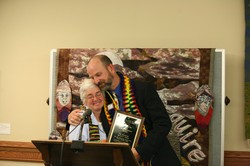 Great ministries and faithful people were celebrated Monday evening at the 219th General Assembly as members of the Presbyterian Health, Education and Welfare Association gathered to honor programs related to six of its 10 networks.

PHEWA is a community of ministries serving the Presbyterian Church (U.S.A.).

The PHEWA awards reception is one of his favorite nights of any General Assembly, said the Rev. Bob Brashear, PHEWA board member.

“When you put all these networks together, the whole is greater than the sum of its parts,” he said. “This is a whole ministry.”

Presbyterians for Addiction Action presented the David Hancock Award to Susan Koll, chairwoman of Faith Partners in St. Paul, Minn. Faith Partners is a network of more than 300 faith communities across the country that work to lift the veil of shame around addiction.

“For years, churches have opened their basements to Alcoholics Anonymous and other addiction groups,” said the Rev. Nancy Troy, former director of PHEWA. “But what if churches opened the doors to Sunday school classes and sanctuaries?” she asked. House of Hope has done just that.

Presbyterians Against Domestic Violence Network presented the Breaking The Silence Award to LACASA, a domestic violence ministry in Howell, Mich. LACASA is associated with First Presbyterian Church of Brighton, Mich.

LACASA focuses on empowerment, social justice and providing a safe space for women and children.

The Presbyterian AIDS Network awarded the Faith in Action Award to the Red Ribbon Fellowship, a ministry of First Presbyterian Church, Elizabeth, N.J.

The church first became concerned about AIDS in the mid-1980s, starting a support group for the community. The group later began focusing more on spirituality and God, which led to the formation of the Red Ribbon Fellowship in 1994. The group provides community service, hosts worship and acts as a support system to fight stigmas.

“The fear, stigma and discrimination still live among us strongly and silently today,” said Rafael Rodriguez, coordinator of the program.

SFTS is home to the Shaw Family Chair for Clinical Pastoral Education, the first such endowment of its kind.

“In every way, (the program) connects the seminary with the community in building future leaders in the church,” said the Rev. Laurie Garrett-Cobbina, who holds the chair.

Presbyterians for Disability Concerns presented the Nancy Jennings Award to the Rev. David E. Young for his work with The Arc of Midland in Midland, Mich.

The organization works to promote the welfare of people with developmental disabilities and increase their presence, participation and inclusion in the community.

“We are all only temporarily able,” he said.