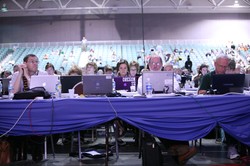 The 219th General Assembly (2010) today urged the Presbyterian Church (U.S.A.) Board of Pensions (BOP) to extend equal spousal and dependent benefits to same-gender domestic partners as it does to married plan members.

It also approved an increase in BOP pension dues of up to 1 percent, effective Jan. 1, 2012, to cover the cost of the additional benefits. The vote on the resolution was 366-287, or 55 percent to 43 percent.

Many supporters agreed with Kati Chan, a Young Adult Advisory Delegate from San Francisco Presbytery, that extending benefits to same-gender households “is a matter of social and financial equality. … We have advocated equality for years. Why not practice it with those in our own churches?”

Opponents argued against the proposal on theological and financial grounds.

The Rev. Harry Hughes of New Castle Presbytery said approval of same-gender benefits “would validate same-sex relationships in violation of church policy and Scripture,” adding that the measure would “increase the level of conflict and division” in the PC(USA).

To address concerns that the added benefit would create a moral dilemma for some church employers, the resolution includes a provision urging the BOP to create a “relief of conscience” fund to segregate dues of employers who are conscientiously opposed to same-gender benefits. The board has a similar provision for employers who object to their dues being used to pay for abortion procedures.

Noting that the measure would raise BOP dues to 32.5 percent of effective salary, the Rev. Faith Jongewaard of Mission Presbytery said, “I’m in a church of 725 members and we could probably afford this, but a lot of small churches can’t, so this is also a justice issue for them.”

Commissioners seemed persuaded by arguments like that of the Rev. John Vest of Chicago Presbytery. “This is not about [gay] ordination or marriage,” he said. “It’s about employers who don’t give and employees who don’t get the same benefits.”

By a voice vote, the Assembly rejected a commissioners’ resolution that would have banned abortion as a covered BOP benefit. Andrew Browne, the board’s corporate secretary, said $11,000 out of $160 million in medical benefit payments last year went for abortions.