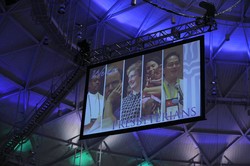 The screen at plenary showed some of the many faces seen at the 219th General Assembly (2010). —Photo by Danny Bolin

“I think everyone in this room has achieved the status of polity wonk,” said Moderator Cindy Bolbach to great laughter and applause.

Polity wonks welcomed the comedic relief following debate that reflected the distrust some commissioners hold for the General Assembly Permanent Judicial Commission’s (GAPJC) authoritative interpretations on cases that come to them between Assemblies. A minority report that prompted the debate remained a minority by a vote of 172-451.

The Rev. Anne Epling, moderator of the Church Polity Committee, thanked the commissioners and leadership for their mutually respectful and hard work on the 52 items of business decided or received. That business earned a few questions and explanations and some debate beyond the item of authoritative interpretation, but was otherwise approved by the Assembly.

Other actions affirmed by the Assembly: