Quantum mechanics in the Bible? It’s in there, says speaker 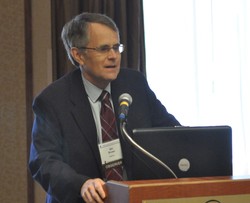 The disciplines of science and theology do not dwell in opposing realms, according to William P. Brown, whose latest publication brings together conversations between the theist and the evolutionist.

Brown, who spoke at Thursday’s Science and Faith luncheon sponsored by the Presbyterian Association on Science, Technology and the Christian Faith, is professor of Old Testament at Columbia Theological Seminary.

In his study of biblical creation narratives, he says, “It is almost as though the ancient chroniclers foretold the emergence of modern scientific enquiry and its results.”

In Brown’s new book, The Seven Pillars of Creation: The Bible, Science and the Ecology of Wonder, he shows seven distinct creation traditions in the Torah and posits that each highlights what science is currently discovering.

Texts from Genesis, Job, Psalms, Ecclesiastes, and Isaiah all contain creation narratives that equate with quantum mechanics and laws of thermodynamics.

“God calls living beings out of dust and creates a common linkage between all life. It’s the stardust-stuff of science,” Brown says. “God is a biophile who savors life in its fullest complexity.”

The continuing arguments between theology and science jeopardize the common bond of wonder for God’s creative work that should naturally exist between these two disciplines. Brown states, “May the shared terrain between science and faith not be a minefield but a playground filled with the thrill of discovery, the delight of discernment and the honoring of creation.”