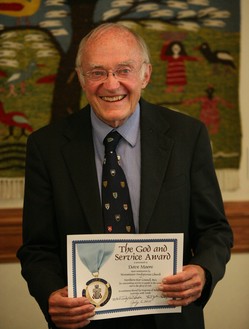 As scoutmaster to two Minneapolis Boy Scout troops, Dave Moore has mentored 203 Eagle Scouts over 45 years as a scout leader.

Ninety of those Eagle Scouts are Hmong refugees who came to this country from war-torn Laos beginning in 1981.

For being one of the top Eagle Scout mentors in the nation, Moore, a longtime member of Westminster Presbyterian Church in Minneapolis, the sponsor of both troops Moore has led, was honored Tuesday during the National Association of Presbyterian Scouters luncheon at the 219th General Assembly (2010).

“Dave’s leadership,” said Westminster pastor the Rev. Tim Hart-Andersen, “is something for which we in the congregation give thanks all the time.”

Moore is the author of “Dark Sky, Dark Land,” a book that tells the stories of the Hmong Scouts he helped mentor in Troop 100 – Scouts who, he said, taught him just as much as he taught them.

While teaching at Minneapolis’ Thomas Edison High School, more than 300 Hmong students, the refugees of the civil war in Laos during the early 1980s, were suddenly thrust into the student body. With little to no English, some joined gangs – even though that’s not culturally appropriate for the Hmong people, Moore said.

Instead of gang life, Moore offered the boys the Scouting life.

Moore offered snippets of the Scouts he featured in his book, including Chao Vang, conscripted into a soldier’s life as a child. He swam across the Mekong River to freedom in Thailand, then borrowed a boat to return for his friends.

Later, Moore tried to teach him important terms in the Scout Oath, including “loyal,” “trustworthy,” and “brave.”

“How do you teach those words to Scouts who don’t know the language?” Moore said. “I told him if you take a boat to rescue your friends, you are all three.”