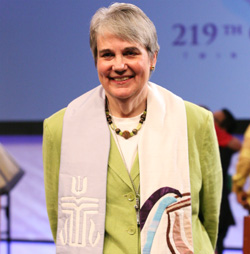 With an unusually large number of contentious issues on the agenda, the 219th General Assembly (2010) — with the theme “Out of the believer’s heart shall flow rivers of living water” (John 7:38) — could have been a stormy crossing. Th at it wasn’t is a tribute to the spirit of civility and unity that predominated among the 712 commissioners and 200 advisory delegates who diligently adhered to their commissions “to discern the mind of Christ.”

They were also well-served by two calm and competent leaders — Moderator Cynthia Bolbach and Stated Clerk Gradye Parsons. While no Assembly produces consensus on many issues, the 219th General Assembly demonstrated Presbyterian governance at its best — elders, ministers and advisers worshiping, laughing, praying, singing, studying, debating and navigating potentially treacherous waters together to seek the best way forward for the Presbyterian Church (U.S.A.).

Several commissioners and advisory delegates have been invited to blog about their experience of the General Assembly.

At its annual meeting from March 5-10, the Presbyteries’ Cooperative Committee on Examinations for Candidates (PCC) sought to clarify for both examinees and readers the standards of evaluation for determining whether a particular exam submission satisfies the requirement of G-2.0607d in the respective area of examination (and, thus, receives a “Satisfactory” [S] evaluation). This clarification of the standards was in response to a pattern of increased reliance upon direct citation of source materials since the Church Polity, Theological Competence, and Worship and Sacraments exams joined the Bible Exegesis exam as “open book” tests in the second half of 2014. The … 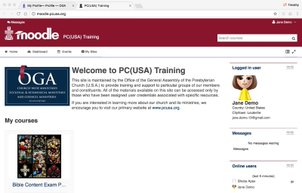 Today the Presbyteries’ Cooperative Committee on Examinations for Candidates (PCC) has officially launched a new resource to assist in preparing for the Bible Content Examination. All inquirers and candidates registered by their presbyteries with the Office of the General Assembly may use their accounts on the exams website (https://exams.pcusa.org) to access a special course on the PC(USA) Training site.

As initially announced in a press release on April 6, this course includes updated guidance from the PCC’s Handbook to the Standard Ordination Examinations regarding the structure of and preparation strategies for taking the BCE, a revised video on these topics, …

At a previously scheduled meeting on September 8-9, 2016, the Executive Committee of the Presbyteries' Cooperative Committee on Examinations for Candidates (PCC) had extended discussion about the results of the most recent Bible Content Examination (BCE). The following is their response to concerns about the exam from across the church, issued with the concurrence of the full PCC:

As part of its regularly scheduled fall meeting, members of the Executive Committee of the Presbyteries’ Cooperative Committee on Examinations for Candidates (PCC) gave extended time and discussion to reviewing the results of the September 2, 2016, Bible Content Examination (BCE) along …

This is approximately my 96th monthly column. It is the bookend for my eight years of writing these columns. I want to thank you for sharing your stories with me. You have trusted me with your joys and challenges in conversations across the congregations and mid council bodies of the Presbyterian Church (U.S.A.). Please know that each of your stories has impacted me and will always remain part of my understanding of faith. What follows is my journey of faith that I prepared as part of my reentry into the Presbytery of East Tennessee.

These resources (including GA Bible study, informational articles and daily devotions at the Assembly), normally only available to subscribers, will give you all the information you need to know about General Assembly and ensure that your experience at GA is a rich one.