GA approves ‘Breaking Down the Walls’ report on Middle East 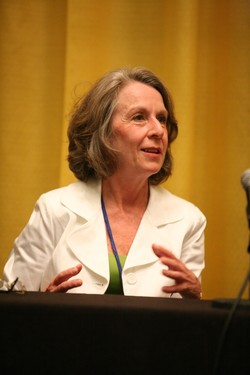 The Rev. Karen Dimon, moderator of the Assembly Committee on Middle East Peacemaking Issues, spoke at the press conference on Friday. —Photo by Danny Bolin

The 219th General Assembly approved the recommendation of the Middle East Peacemaking Issues Committee on Friday regarding the report “Breaking Down the Walls,” which spotlights the Israeli-Palestinian conflict.

The full Assembly action followed a unanimous decision by the committee to accept an amended version of the report, which came to it from the GA Middle East Study Committee (MESC).

The was a lot of heat coming in regarding this report, Cindy Bolbach, Moderator of the 219th General Assembly, told members of the press gathered Friday. The committee worked hard to find an avenue on which the Assembly could agree, she said.

The action taken was “Presbyterians at our best,” said Bolbach.

The Assembly took its vote after hearing from committee moderator the Rev. Karen Dimon and various commissioners who rose to speak.

The committee was aware that the views of the church on this issue are diverse and passionate, Dimon told the Assembly. And the committee represented “a wide range of those views,” she added.

Yet I stand witness to “the Holy Spirit working in our committee,” said Dimon.

Among the amendments the committee made to the original MESC report were those calling for the Assembly to:

Elder Rick Ufford-Chase, Moderator of the 216th General Assembly (2004), spoke on the Assembly floor on behalf of ten former Moderators who celebrate the unanimous vote of the committee.

Additionally, the General Assembly used the action taken on the MESC report as their answer to other related items of business, so that neither of these items were approved:

The Assembly approved the item seeking compliance to U.S. government policy in the use of military aid in Israel and Palestine.