Committee urges congregants to be ‘ambassadors of conciliation’ 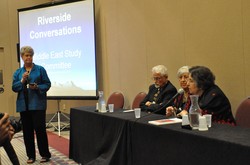 The pre-assembly workshops included a Riverside Conversation on the Middle East. —By Tony Oltmann

The nuts and bolts of the Middle East Study Committee (MESC) report, “Breaking Down the Walls,” were outlined Saturday morning during Riverside Conversations at the 219th General Assembly.

Assembly-goers filled two sessions to learn more about the committee’s 172-page report, which will go before the GA’s Middle East Peacemaking Issues Committee.

“The purpose for today is to clarify your questions,” said the Rev. Susan Andrews, a member of the MESC and moderator of the conversation sessions.

Eight of the nine committee members signed off on the report. The Rev. Byron E. Shafer, professor emeritus at Fordham University in New York City, did not sign. He contends the report “does not do a good job of expressing our support and love for Israelis.” Still, his contributions to the committee included authoring the report’s biblical and theological section.

“It was a very intense, emotional … conversation that was going on,” Andrews, general presbyter of Hudson River Presbytery, said of the committee’s work. Almost every word “was negotiated.”

One of the central components of the report, which is divided into three parts, is its 39 recommendations in part two. The recommendation sections are Affirmation of Human Rights & Moral Principles; Affirmation of Previous General Assembly Policies & Statements; For the Witness of the Presbyterian Church (U.S.A.); Urgent Actions Toward Justice and Peace in Israel, the Occupied Territories of Palestine, and Jerusalem; Urgent Actions for a Comprehensive Peace with Justice in the Middle East; Addressing Our Own Government; Concerning Christian Presence in the Middle East; and Engaging This Report.

Among the specific recommendations are:

Andrews said the committee’s work built on and affirmed the PC(USA)’s long history of policies and statements regarding the Israeli-Palestinian conflict, and she stressed the urgency of the present situation.

“The window of opportunity… is rapidly closing,” she said. Among the realities on the ground is that the numbers of Christians in Israel and the Palestinian Territories has not kept pace with the normal rate of population growth. Their proportions have declined to the current 1.37 percent.

“It is a complex situation that demands action,” particularly as it relates to giving voice to those who have not been heard over the years, Andrews said.

Acknowledgement was given to those who claim the committee’s report is not balanced, but Andrews also asserted, “We are trying in this report to speak truth and love.”

The call is to be ambassadors of reconciliation, she said. “When there is justice there can be peace.”

Part one of the committee report contains eight individual letters to the ecumenical and interfaith community, as well as to Israelis, Palestinians and Americans. Andrews said the letters, which mirror what was done by the Apostle Paul, are specific to the audiences for whom they are intended.

Part three of the committee report includes study materials to be used by individuals, groups and churches. Andrews made it clear that the committee is asking the Assembly to receive part three and commends it to the church for study.

The Rev. Dr. Victor Makari, the PC(USA)’s coordinator for the Middle East Office, shared some history of the Presbyterian Church’s presence in the region, which dates back to the early 1800s. He also relayed some of the expectations of partners in the Middle East.

“They want us to be accountable to our own faith,” to our theology and our Biblical understanding and ecumenical commitments to the world and the region, he said. “Secondly, they expect us to speak the truth… about the reality that we witness.”

And third, they expect us to be a voice to their pain “and to stand in solidarity,” Makari said. “They want us to share their hope.”