We are the problem and the solution 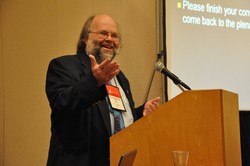 The Rev. Mark Koenig led a Riverside Conversation on "God's diverse family" encouraging an open church for all. —By Tony Oltmann

We as individuals, congregations, presbyteries and a denomination are the problem as well as the solution when it comes to racism. That recognition was the focus of Saturday’s Riverside Conversation “Equipping the Church for Ministry with God’s Diverse Family” during the 219th General Assembly (2010).

“We want to give you a taste of working to create, explore and rejoice in the diversity of God’s creation,” said Mark Koenig, coordinator of the Presbyterian Peacemaking Program, who moderated the program.

“Our hope is that this conversation begins this morning and continues when you return home,” he said.

Several individuals shared their stories of transformation and how racism and inequality have affected their lives.

“I believe wholeheartedly that no matter where we are, and no matter where we are from, God has blessed all of us and given us the ability to make a difference and make a change in our church, our communities and our world,” said the Rev. Jerrod Lowry of St. Paul Presbyterian Church in Louisburg, N.C.

Lowry told of the difficulties his congregants and community dealt with overheated differences of opinion on health care legislation. He said he was inspired to preach on Passion Sunday about the “Voice of Change.” The congregation responded by writing to legislators and officials on both sides of the issue, asking them to recognize there could be differences of opinion without resorting to threats and name-calling – to “affirm the humanity” of one another.

“There is a power in the raised voice, and that is where change begins to take place,” Lowry said. “I hope and pray that you will find that ‘voice of change,’ and realize that even a small church from a small town can make a change and a difference.”

The Rev. Buddy Monahan, chaplain of the Menaul School in Albuquerque, N.M., spoke of the challenges of getting youth to recognize the existence of racism, how to teach them its consequences and equip them with the tools to change.

“As a chaplain, I began to hear things from both students and faculty members that concerned me,” Monahan said.

Monahan worked with PC(USA) officials to obtain a grant to begin “Student Success Program,” a program to help students address the issues of racism.

He also invited the Rev. Eric Law, an Episcopalian priest and director and founder of the Kaleidoscope Institute, to explain to the students that change begins with one’s self.

Catrelia Hunter and Ann Ferguson of Presbyterian Women shared how the organization allowed them to change how they viewed themselves rather than how they viewed others. The organization is actively working to “dismantle” racism and some of the racial difficulties that were faced when PC (USA) was formed, Hunter said.

“We had to find a way to work through the cultural differences, and we did,” Hunter said. “The God we serve is a God of diversity.”