Listen for the Word and the Spirit together 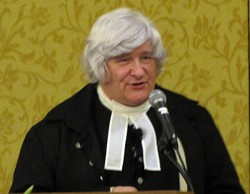 The Rev. Grif Vautier from the Presbytery of the Grand Canyon, aka "John Witherspoon" appeared at the Presbyterian Coalition Breakfast on Sunday to help honor Independence Day. —Photo by Dennis Sanders.

Heads swiveled when the Presbyterian Coalition’s co-moderator, Nancy Cross, announced the entrance of John Witherspoon, signer of the Declaration of Independence and Presbyterian clergyman, during the group’s Sunday breakfast at the 219th General Assembly (2010).

Witherspoon’s portrayer, the Rev. Grif Vautier of Kingman, Ariz., donned a robe and Geneva collar like Witherspoon wore to the Continental Congress and reminded the crowd that England’s King George referred to the American Revolution as the “Presbyterian Rebellion.”

“Three things don’t change: the character of God, the nature of man and the gospel of Jesus Christ,” said Vautier. “We must protect the proclamation of the gospel. If we don’t, Christianity in this country is in danger.’’

Vautier continued the theme of protecting the gospel, saying that Christians in the western world, though they have ears, do not listen to the voice of God. The Rev. Mateen Elass, pastor of First Presbyterian, Edmond, Okla., said the way to protect the gospel should neither be too legalistic nor too individualistic.

“I don’t share the same sanguine approach as some of our leadership up on the podium,” he said.  “I think there is a lot more involved than just invoking the presence of the Holy Spirit.”

Elass was referring to the certainty he heard during General Assembly orientation that “the Holy Spirit is at work and will guide us to make the right decision.’’

He said it is hard to read the signs of the times and easy to use the language of hearing from the Holy Spirit to justify personal views. He navigated several elements and qualities the church should seek when determining what God is saying.

God’s character is consistent and known through Scripture because God loves to communicate and “disclose himself to his people,” Elass said. He emphasized the importance of keeping the Word and Spirit together when discerning the will of God.

To do this successfully, he said that one must have a strong personal relationship with God and be in a community of disciples who are already walking in obedience.