Co-moderators were elected from 15 candidates 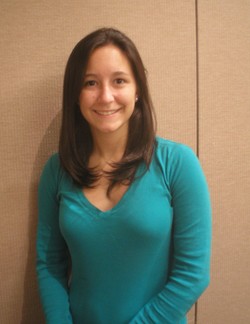 While other Assembly participants were retiring to their rooms following Saturday’s late-night Moderator election, Caroline Sherard and Michael East were just getting their second wind.

As the meeting room vibrated with the driving beat of energizers, the Young Adult Advisory Delegates co-moderators – elected from a field of 15 on Friday evening by the 161 YAADs of the 219th General Assembly (2010) – prepared to motivate and inspire their cohorts.

East, an elder and inquirer under care of Eastern Oklahoma Presbytery – which he represents here as a YAAD – is a graduate of Austin College in Sherman Tex., who plans to enter Columbia Theological Seminary in September. He is a member of First Presbyterian Church in Sapulpa, Okla.

A self-confessed “GA junkie” after having attended General Assembly only once before as an observer in Louisville in 2001, East said he has watched everything from a distance since then both by using the Web and by keeping in touch with his former pastor, who attends every assembly.

“I love church leadership,” he said. “I like working in this kind of setting in these groups. My goal is to be moderator of the General Assembly one day.”

Sherard, a member of the Abbeville, S.C., Presbyterian Church, is a rising junior and an elementary education major at Winthrop University. She is the YAAD from Trinity Presbytery. Surprised by her presbytery’s invitation to serve, this is her first General Assembly.

“I was sitting in my dorm room one afternoon when I got a call from my presbytery,” Sherard explained. “I said, ‘I’ll let you know, but my answer will likely be yes.’ I love the ministry, and I love the church.”

East and Sherard explained that the YAADs gather nightly following the close of the business meeting primarily for community building and worship, which they help lead. To lend support to the co-moderators – and all of the YAADs – in carrying out their important responsibilities, the Stated Clerk’s office has assigned four assembly assistants as YAAD advisors.

For the 219th GA, they are Laura Cheifetz, Kevin Hay, Ellie Johns and Jeff Moles. Tyler Gibson, an intern with the Office of the General Assembly, serves the YAADs as liaison.

Both East and Sherard expect to leave the Assembly changed.

“I want to leave knowing that our presence here has hopefully made an impact on the decisions that are being made for the future of the church, that we are already part of today,” said East. “I hope that we as YAADs will influence commissioners as to how youth think, even as they influence us. It’s a two-way street.”

“I’m just getting into that leadership role at the beginning of the week,” she said. “As I grow into my position, hopefully by the end of the week I will really know what’s going on!”