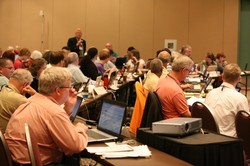 The committee debated for several hours Monday whether to create a special committee to deal with the myriad stresses facing synods and presbyteries or to establish the rarer and more powerful 21-member commission that would be “authorized to act as the General Assembly.”

The committee amended the commission proposal – brought by the Committee on the Office of the General Assembly (COGA) – nine times to more closely define its work and require a super-majority to take action. The final measure going to the Assembly passed 38-4 with two abstentions.

“We’re in a moment of history that is uncharted territory,” COGA member the Rev. Eileen Lindner told the committee. “We need a commission because the time is too urgent – we cannot tell some of our most hurting governing bodies to tread water for two more years.”

However, Mike Herron, stated clerk of Mississippi Presbytery, while acknowledging the sea changes going on in middle governing bodies around the country, questioned the move. His presbytery, for instance, has reduced staff rather than cut programs. “We’re just finding different ways to serve the kingdom of God,” he said. “If you need to change, appoint a committee – there’s no urgency to appoint a powerful commission.”

COGA member the Rev. John Wilkinson responded to committee members’ concerns that a 21-member commission given the full authority of the General Assembly would be too powerful.

“The commission we propose cannot act unilaterally, but only at the request of the middle governing bodies at issue,” Wilkinson insisted. “My guess is any big-ticket items are going to come to the next Assembly anyway.”

Most, but not all, middle governing body officials who spoke to the committee during its 90-minute open hearing Monday morning supported the commission. The Rev. Betty Meadows, executive presbyter for Mid-Kentucky Presbytery and president of the Association of Executive Presbyters, urged the committee “to give the group power and flexibility because of the profound changes going on.”

Noting that three new church developments have been spawned by commissions in her presbytery, Meadows said, “We know that the Spirit is breaking out all over. We need people who are empowered to know and respond to what the Spirit is doing.”