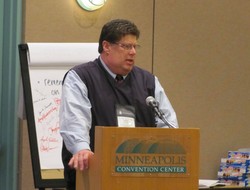 The Rev. James Szeyller, chair of the Special Committee to Study Issues of Civil Union and Christian Marriage, addresses the assembly committee on Monday morning. —Photo by Dennis Sanders.

The 219th General Assembly Committee on Civil Union and Marriage Issues voted 47-8-2 Monday to approve a report that urges Presbyterians to further study the issues and stay in covenant with each other while they do so.

The report of the Special Committee to Study Issues of Civil Union and Christian Marriage, signed by 10 of its 13 members, passed the Assembly committee with minor amendments.

The committee rejected a minority report submitted by three members of the special committee. The minority report, which stated that “only marriage between a man and a woman is ordained by God,” was defeated 40-15, with one abstention.

The committee heard testimony on both the final and minority reports. Mitzi Henderson of San Jose Presbytery said her son met Ray, “the love of his life,” 25 years ago. Henderson wondered what to call Ray. “A partner is a business relation, but theirs is a loving family relationship,” she said.

Two years ago, the men traveled to California to “turn their relationship into a marriage,” she said. “After the wedding Ray referred to me as ‘Mom,’ the first time in 23 years he could use that term. I felt tears welling up in my eyes. He is my son-in-law. He is my son.”

But the Rev. Seung Nam Kim, a pastor in Hanmi Presbytery, said that while more than 400 Korean churches “are delighted to be members of your denomination, every General Assembly brings us such a terrible and dangerous word, and so we are troubled. If you decide [to approve the report], our churches will be torn apart.”

Both the majority and minority members of the special committee presented their reports and answered questions.

The Rev. Jim Szeyller, chair of the special committee, said the majority report “makes no argument” for changing marriage definitions in the PC(USA) Constitution. It does, he said, “identify a new way for us to be in conversation, because what we have been doing has not been particularly fruitful for the kingdom.”

“We have no right to tell God who belongs at the table,” said the Rev. Clay Allard, special committee member. “Pride has a way of closing our ears and our eyes so that we hear and see only a caricature of what is in front of us.”

“Marriage is a gift, not a right,” added the Rev. Emily Anderson, another special committee member. The model of “mutual forbearance” as practiced by both sides of the special committee “calls everyone into relationship.”

“We have thousands of same-gender couples in our congregations,” said Velma Tilley of Cherokee Presbytery. “To not extend our love and compassion to those couples is unconscionable.”

But the Rev. Sherry Edwards of Glacier Presbytery argued that “small churches are not quite ready to accept the final report because it is a huge step. I feel the minority report gives us time for discussion and for study.”

The special committee’s final report now goes on to the full Assembly for consideration.