Caring for the Earth will prove to be among most critical, speaker says 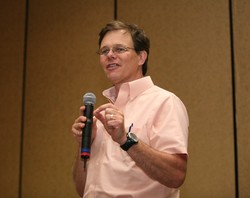 Elder Rick Ufford-Chase, Moderator of the 214th General Assembly (2004), said care for the earth is no longer an issue on the fringe, but is now “legitimately the beginning of a movement.”

The signs are that the fringe “has moved to the center,” he said. “God’s spirit is at work and the wave is beginning to crest.”

Ufford-Chase, executive director of Presbyterian Peace Fellowship, shared his thoughts during the Presbyterians for Earth Care luncheon Tuesday. The organization, formerly Presbyterians for Restoring Creation, exists to help people of faith and their congregations fulfill the call to make creation care a central concern and to be incorporated into the church at every level.

Using much of Leviticus 26:3-6 as the basis of his talk, Ufford-Chase told the group there is nothing more important than developing the vision in that Scripture, which can only happen when all of God’s creation is lifted up.

He said 20 years from now, the concerns of Presbyterians for Earth Care and other like groups will prove to be the most critical issues of the church.

“We are the future issues of this denomination and any other body of faith,” said Ufford-Chase, co-director of Stony Point Center and the co-founder of the Community of Living Traditions, a Muslim, Jewish and Christian residential community committed to the study and practice of nonviolence.

With that as the reality, Ufford-Chase told those gathered their work must continue to be done in partnership. “We’ve formed networks and association,” he said. “We are ready to be a part of the cresting wave.”

He also challenged attendees to be committed to a place and faith community for the long haul, to take on the wildest dreams they can imagine, to “break every taboo that you can find about crossing barriers,” and to defy all conventional wisdom about what is possible.

The luncheon also was the venue where Presbyterians for Earth Care presented its William Gibson Award and its Restoring Creation Award. The Rev. Robert L. Stivers, a pioneer in Christian environmental ethics; and the Rev. Kristina Peterson, pastor of First Presbyterian Church of Bayou Blue in Gray, La.; received the Gibson Award.

North Como Presbyterian Church in Roseville, Minn., received the Restoring Creation Award in recognition of its years of programs and activities that have transformed the life of the church and the ways members have lived outside the church.