Presbyterian Writers Guild hears of his journey to pastor-writer vocation 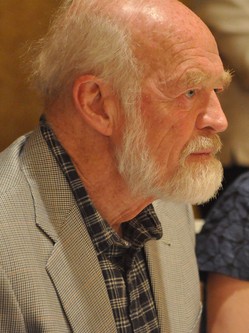 Presbyterian writers, both aspiring and published, were served up a feast at the 219th General Assembly (2010) by the author who memorably encouraged Christian readers to add to their repertoire the essential command to “eat this book.”

“It was while teaching the Book of Revelation and doing pastoral work in the congregation that I became pregnant,” Peterson began, employing that metaphor to narrate his formation as a pastor and writer during his early years in New York as an assistant professor while “making ends meet” as an assistant pastor. “It took three years, 1959 to 1961, to come to term. And then there it was, a pastor-writer vocation.

“I never intended to be a pastor,” he said. “I was doing it for the money.”

A few weeks into teaching, Peterson said he came to identify with John of Patmos, whom he described as “the patron saint of pastors.” During that same time, he also “became aware of the contrast between being a professor in a classroom and a pastor in a congregation.”

In his journey toward becoming a pastor, Peterson said he became a writer as well.

“I found a way of writing that I knew poets and novelists practiced but had never really pursued myself: heuristic writing,” Peterson said. “Writing to explore and discover what I didn’t know. Writing as a way of entering into language and letting language enter me …Writing as a way of paying attention. Writing as an act of prayer.”

In closing, Peterson acknowledged the role that artists played in his formation. “I embraced artists as allies,” he said. “They took their place alongside the theologians and biblical scholars in my formation … My artistic medium was words, written and prayed and preached.”

Peterson, who has written more than 30 books, is probably best known for The Message: The Bible in Contemporary Language. The biennial David Steele Distinguished Writer Award, named after the late poet, essayist and humorist, is given to recognize the cumulative work and influence of a Presbyterian Church (U.S.A.) writer.

In other highlights, the PWG presented its 2010 Angell Award for the best first book by a Presbyterian author to Rebecca Barnes-Davies, a student at Louisville Presbyterian Theological Seminary and consultant for environmental and social justice ministries for the PC(USA), for her book, 50 Ways to Help Save the Earth: How You and Your Church Can Help Make a Difference.

Barnes-Davies’ award was accepted on her behalf by Jenny Holmes, moderator of Presbyterians for Earth Care, who said that the eco-justice network was elated at the book’s publication. “We especially appreciate the way it integrates the practical with the biblical and the spiritual,” Holmes said.

PWG board member the Rev. J. Barrie Shepherd both presented and received the Lifetime Achievement Award to the “Presbyterian poet laureate” Ann Weems, whose recent illness and ongoing recovery prevented her from attending this year’s Assembly. In a humorous presentation – in which he literally wore both the presenter’s and the recipient’s hats – Shepherd gave a moving tribute to the celebrated author, whose most recent book is From Advent's Alleluia to Easter's Morning Light: Poetry for Worship, Study, and Devotion.

Shepherd, a previous recipient of the Lifetime Achievement Award, was also presented belatedly with a plaque for his achievement by past PWG president and current board member Kathy Bostrom, who presided at the event.

The 31st annual event also featured the traditional singing of the Presbyterian Writers Guild Hymn, written by the late Vic Jameson, a brief business meeting conducted by the Rev. Bill Lancaster, PWG president, and an update from Vince Patton, director of church relations for the Presbyterian Publishing Corporation.